So this week at work I got reacquainted with the Faith Hill video “Like We Never Loved At All.” She and husband Tim McGraw play the singing duo Jackie and Isaac. Hard to believe it’s been almost 10 years since the video was released… yeah, it was 2005! That was before Twitter, before hashtags, before iPhones and iPads, heck it was before everything on TV went hi-def. Anywho, watching it again I noticed Tim signs his name as “Issac” though clearly his character’s name is “Isaac.” Weird, right? Well, Issac, as it turns out, is simply an English variation of Isaac, however why Tim’s character uses the variation we may never know. 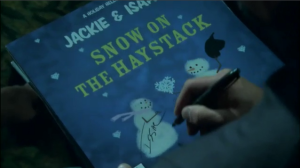 Maybe it was a subtle jab at Jackie, since they obviously had broken up before the performace they’re preparing for in the video. Perhaps his insistence on spelling it with 2 s’s instead of 2 a’s began to eat at her over the course of their relationship. Then she noticed he also chewed his food slowly, like a cow and that bothered her. Not to mention his peculiar affection for hats. He’s got a flat one. A cowboy one. A baseball one.

“Just what exactly is he covering up, up there?” she wondered.

So they broke up. Reuniting for this performance, it took all her strength not to slap Issac right in the face. To slap his silly hat right off his silly head. But still, deep down, she loved him. That’s why (spoiler alert) she doesn’t say “yes” when Moses proposes to her. Hey, if Isaac can change his name, then I can call the old guy Moses. I have rights, too. Check out the video, it really is a good one.