In the summer of 2000, I worked at Kanakuk Kamps in Lampe, Missouri. In fact, I worked there for that summer and the next two. One of my favorite parts of the camp was the kitchen. Talk about good food, the cooks there were good at what they did. However, on days I wasn’t in the mood for “Frito Love,” there was peanut butter and jelly. Not secretly my favorite sandwich of all time. One day, as I sat down with a couple of sandwiches in my normal seat at the middle table, the director of the camp said to me, “creature of habit.” He was referencing how I chose to sit in the same spot pretty much every single meal. He was right on the money. I guess I never realized how routined I was until he said it. And routines are a good thing. They provide stability, normalcy, a way to measure growth and progress, and as was my case at the camp, safety and comfort. I began working at this camp without knowing anyone. It was far away from my family, and all of my friends. So having my place to sit and eat meals became familiar. And I can’t think of anything more important for a person who feels out of place than familiarity.

Fast forward to 2009, and I was still that same creature of habit. Between balancing work, friends, and whatever else came up, I developed a routine that worked. I started my job at nine, worked out at the YMCA during lunch, and went home at six. Then in December I got a puppy. Hello new routine. 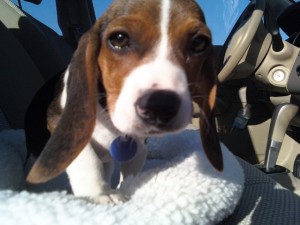 If I could quickly offer some advice, when you’re considering puppy adoption, do it! And also, do it in the spring or late summer. Training a dog in the winter is cold, exhausting, and cold. I learned the hard way that I was slower at putting on warm clothes at 4 A.M. than she was at making yellow puddles. So adopt a dog, then buy some carpet cleaner. My dog’s “accidents” became less and less frequent, however, when I learned the most important ingredient in training, routine. Through establishing a routine, I got better (and more) sleep, and she learned to hold it till she was outside. Routines are a good thing.

We are all creatures of habit and even though we may stray a bit on day to day activities, our weeks, months, and years will highlight an overall routine. And that’s a good thing. It means you are stable. Just remember, there’s a fine line between routine and rut. So have enough of a routine to feel safe, but every so often shock the system by sitting in a different spot.