In Joe Biden’s speech after winning more delegates on March 10th, there are three moments that should concern people about his cognitive health, his physical health, and the bigger picture. Check them out below…

Microexpressions (4:47)… in this clip, Joe Biden touches his face as he says, “…and it appears, although it’s a little premature, it appears that’s what we were able to do tonight,” referring to his momentum building with possible wins in Michigan, Missouri, and Mississippi, etc. Touching of one’s face could be a “tell” that they are lying or stressed about the information they’re delivering. Also note this is the ONLY time Joe touches his face in the entire 11-minute speech. 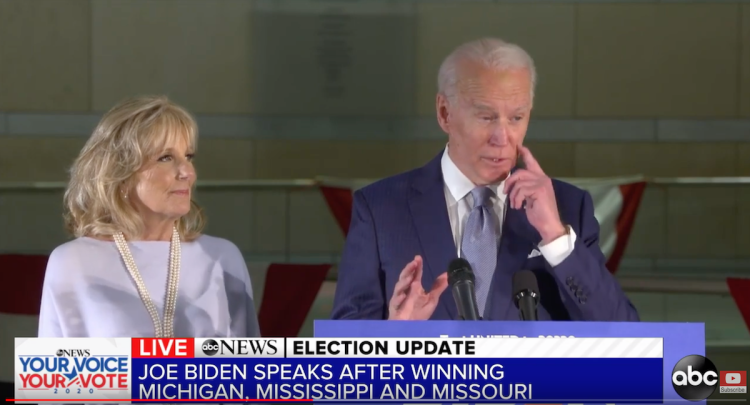 No child left behind (6:40)… in this clip, he says, “Providing every child with access to good edruration.” Please, please, please click the link to watch the clip, it’s so odd, as if his teeth were about to fall out… again. After the gaffe, his wife wants to look over at her husband but also doesn’t want to draw more attention to what just happened, so she tries  to be as casual as possible as she turns her head towards him.

A Trojan horse (10:19)… this clip shows Biden saying, “We’re on– close to the eve of St. Patrick’s Day.” A reminder that this speech was on on March 10th and St. Patrick’s Day is March 17th. If it were December 18th would you say we’re close to Christmas Eve? I guess we can let this one slide but I also thought it was funny the quote he proceeds to use from poet Seamus Heaney is a line referring to the Trojan War where the Greeks used a wooden horse to trick the Trojans, and thereby winning the Trojan War. Perhaps Biden is the Democrats Trojan horse. If he gets elected, the real powers behind him (*ahem* socialists??) show up to rule. That’s probably a stretch, though. 🙂

What do you think about these moments in the 11-minute speech? Are they anything to be concerned about? Chime in below!