Does anyone else’s mind wander during church sometimes? Only me? OK then! That’ll give me something to confess the next time I’m in prayer.

“God, I’m sorry for thinking about ABC’s The Bachelor and what if Adam was the contestant picking from 25 women. I know it’s weird. Thank you for loving me anyway.”

…is pretty much how that prayer would go.

Today in church there was a brief mention of Adam and Eve, and my mind ran with it. Somehow Adam became the star of The Bachelor and Eve was just one of the 25 women competing to guard and protect his heart, which leads to a flurry of questions:

Where would the other 24 women come from?

Would they all be vegetarians?

They’re already in a beautiful garden, so where’re the “exotic” dates?

Who is “there for the right reasons”?

I can see the first caravan of camels pulling up now. Adam, here are the first five women… Mary, Esther, Sarah, Ruth, and Jezebel, who simply winks and says, “Let’s do the d*mn thing.” Adam looks off to the side, “Boy, am I in trouble.” The next five arrive: Rahab, Zilpah, Ashleigh R., Ashley K., and Ashlee M. He whispers under his breath, “So many Ashley’s.” On and on it goes and maybe Eve doesn’t arrive till the final five, since the host (God) wants to save the best for last.

Adam notices Eve right off the bat so she gets the first impression rose. He feels like somehow she’s already a part of him. Get it? Ok, anyway. The first date card arrives… 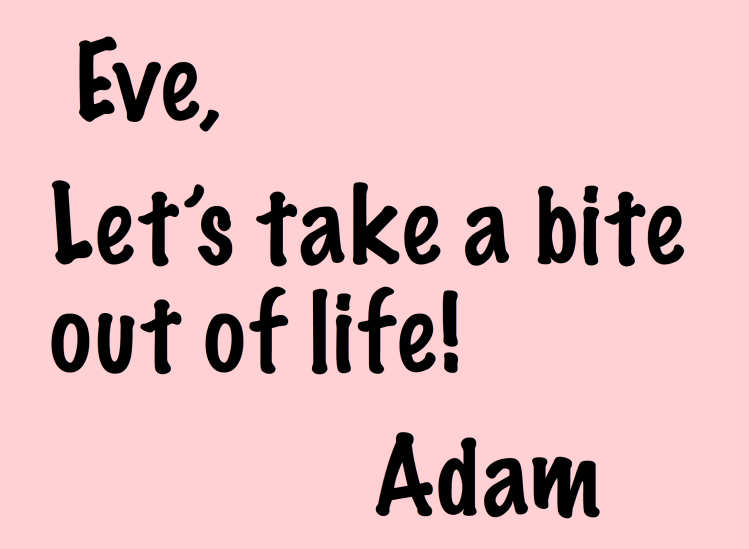 So that date will end badly. A combination of fruit, a snake, and all the contestants are banished from the paradise mansion in Eden…FOREVER!!!!! No Bachelor Pad, no Bachelor in Paradise, and dare I say not even an episode of The Women Tell All. But there is a wedding. Adam eventually picks Eve and they get married.

Years go by and many more seasons of The Bachelor, then along comes the star of the first Bachelorette season ever, Ruth! You can read her story in the Bible but I’ll say this, it includes a sizzling overnight encounter!