The 9th ranked post on Out of the Wilderness has so much information, you may think it came straight from a 1993 Encyclopedia Britannica! You know the ones your parents had on the shelf beside the TV? You probably used them for history assignments in junior high. Or to prop up a crooked table. Well, I give you permission to use this post if you’re ever in need of some useless reality TV information. More specifically, The Bachelor! That’s right, I said it. The Bachelor. Arguably the most successful reality TV show since WWF wrestling.

More about the post: This post is a recap of “The Bachelor Brad Womack: The Women Tell All,” but the real reason it’s ranked #9 is for the pictures. I had no idea so many people were interested in Carrot Top’s pictures pre- and post-steroids. But alas, many search terms that bring people to Out of the Wilderness include “Carrot Top.” Other pictures include Jimmie Johnson’s #48 car as he drove by, Chuck Norris, and Kip from Napoleon Dynamite… those 3 combine for the triple threat of manliness, am I right?

I have come so close to boycotting the show. Well, by “boycotting,” I mean sending in an application but let’s move on. I’m in a fantasy league at work, and that makes watching the show completely bearable. Do I care which guy wins? No.

Am I concerned if the relationship will last? No. Do I want to win the 2012 Fantasy Bachelorette League? Heck yes. The Bachelorette this go round is Emily Maynard. She was a likable contestant on Brad Womack’s season of The Bachelor. She lost (or won depending on how you look at it) when Brad chose her to be his wife, which obviously never happened. We were all cheering for her to win. Is that like cheering for someone to get selected for the Hunger Games? “Yay! Go get’em!! Oh, wait, what happens to them out there? Oh. Hmm.”

To reach that shore you have to leave this one.

I applaud Emily for setting sail once again with the hope of finding true love. She seems to be a genuinely cool person. But what a dumb show. Will any of the 25 guys show signs they’re interested? Here are a few that should be obvious to Emily…


If you wanna keep up with the Fantasy League this season, 1.) Subscribe to this blog site and 2.) you must be super bored!

Welcome to another fantastic recap of The Bachelorette featuring Ashley and her wrist tattoo (click here for pictures)! Please file Episode 3 in drawer labeled “How To Make A Compost Pile” because it started breaking down as soon as Chris uttered the words, “Tonight on the Bachelorette.”

What does a good compost pile need? Green debris, duh! Let’s brush off the green grass from Ben C.’s shoes after his date with Ashley. He got the first date of the episode and it began with dance lessons from Ashley herself. Ben C. thought lessons were the long and short of it until, as they were enjoying a picnic in a large grassy field, Ashley asked him to dance a rehearsed routine with her. Soon after, a flash mob joined them and they all danced happily ever after. Actually ever after was cut short by a short performance from the Far East Movement but Ashley and BC did kiss happily. So we have our green debris, next we need some brown debris. It won’t be from Jeff. He finally took his mask off to which Ashley said, “He’s a lot older than I thought he was.” We need brown, not gray. Let’s check the group date which included Ames, Ben F., Blake, Chris D, Jeff, Lucas, Nick Ryan, William and Bentley. They went to The Comedy Store, a well-known comedy club in Los Angeles. Jeffrey Ross is a master roaster, so he hosted an evening where the guys attempted to roast Ashley. Most of the content was fine, that is until William turned the heat up too high, leaving Ashley burned like yesterday morning’s toast, black and crunchy. That won’t work. Bentley later consoled her as she cried, so he was as refreshing as the brown leaves in the Fall, perfect for our compost. Unfortunately, Bentley continued to pile on the brown debris, but of a different kind. Ashley confronted him about his intentions because she was warned by the ultra-trustworthy Michelle Money from Brad Womack’s season of The Bachelor.

He denied everything Ashley asked about. Don’t you know too much brown is a no-no, Bentley? He decides to leave the show altogether but not before stopping by Ashley’s mansion to say goodbye. Ashley is devastated. He blames his daughter for his departure, more [cuss word that starts with s] piling on all of his other [cuss word that starts with s]. We really gotta balance out all this brown with more green. Enter J.P. He arrives at Ashley’s mansion for a cozy night in, thus conserving gas consumption and protecting the atmosphere. That’s green enough for me. The compost pile is ready. Ashley and J.P. change into pajamas and chat by the fire. This is the cutest Ashley’s looked all season, I just wish the Bachelorette was her sister, Chrystie Hebert-Corns. Boom, roasted. Let this mixed debris sit for a few months and that’s how to make a compost pile.

The interesting thing about compost piles is that they start as a pile of waste, but end up making the world’s best soil. This episode was full of waste, but in the end Ashley will be better because of it. The episode wrapped up with roses going to (Ben C., Ryan P., J.P. got roses earlier) Constantine, West, Mickey, Ben F., Blake, Nick, Ames, Lucas and William. Sent home was Bentley (earlier), Chris D., Jeff (who threw his mask into the fire on his way out).

Quote of the episode:
“Dude, there’s a trailer for sale. It’s a thousand bucks, it’s missing the hitch, though.” -Jeff, The Bachelorette

Ashley Hebert has a tattoo on her right wrist. Check it out below. For show recaps, click here!! 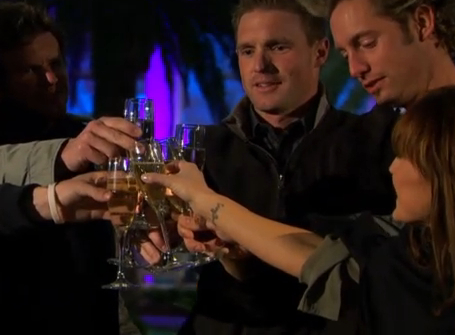 Welcome back to the 21st century version of Love Connection

This season of the Bachelorette features Ashley Hebert (pronounced ‘a bear’) who’s determined to do things right this time around. Ashley finished third on Brad Womack’s season of The Bachelor. She blamed herself for coming up short, but vows that now she will leave with no regrets as she chooses between 25 guys. Episode 1 begins just like the other seasons did, with a little of Ashley’s history… an obvious plug for the benefits of recycling.

Let’s get right to the guys. Ryan P. emerges as a standout even though he made a Taylor Swift heart with his hands. Another early favorite is J.P., who says things like June One instead of June First. Jon comes out of the limousine wearing a pink tie then proceeds to pick Ashley up like a sack of potatoes. He was more successful than Mickey who attempted to give Ashley a gift on behalf of all the men in America, a kiss on the lips. Ashley avoided it, and Mickey went inside. To the average viewer, this may seem like an unrecoverable error for Mickey. However, I’ve observed behavior like this at the dog park. Male dogs will hump anything. Female dogs will just growl and let them keep trying. So Mickey will probably stick around till Ashley has to go home and realizes she doesn’t want to go home pregnant by a dog she met at a public park. Ben C. is a self-proclaimed romantic and Ashley seems to be smitten by him. Ben F. is a winemaker from California. This season’s villain is Bentley who is or isn’t bad news for Ashley, depending on who you ask. She was hoping he would have only one front tooth so her decision would be easy but it turns out he’s not from Kentucky. Tim, who admitted he was nervous around her, ends up drunker than a 21-year old doing the Tennessee Waltz at Florida State.

A couple of other standouts are West, who’s ready for love after dealing with the death of his wife, William who seems to be a pretty good match, Sir Gaga who vows to wear a mask till Ashley knows the real him, and Matt with his phone call to Mom while chatting with Ashley. Letting her talk to Mom is a clear sign he’s into her. If she doesn’t understand that, she should read this: 10 Signs He’s Into You.

Does anyone know why Chris Harrison often mentions that Ashley is meeting 25 of the most eligible bachelors? How can one bachelor be more eligible than another? Anyway, there are 6 guys who are even more eligible now. Tim, Anthony, Rob, Jon, Frank, Michael and Chris M. were sent home with no rose.

Check back next week for a another recap of The Bachelorette. See ya in two and two!