While I believe you are attempting to do good for our country, there is a person here in Tennessee that has been negatively affected by your accomplishments. And that person is me. You see, among other things, I like that you care for the unborn. I like that you care for the born. In fact, my appreciation for your preservation of our society is why I’m writing this today.

Recently I struck up a relationship with a pretty lady. Now, I’ll be the first to admit we weren’t exactly a match made in Heaven. Areas she and I disagreed on were mostly deal-breakers but early on we DID agree on something: to focus on what we had in common. This seems like what any two mature adults would do, knowing that if we were to bring up and only discuss the things we didn’t see eye-to-eye on, our relationship was doomed.

We talked about animals. We talked about music. I even said I like Taylor Swift. Then out of left field, she asked if I supported you, Mr. President. Knowing she held strong liberal beliefs I wanted to respond with something clever and lighthearted but couldn’t exactly come up with an answer that would keep the peace. So I simply said, “I do.” No two words could have destroyed her more than these. It’s as if I called her a dog-faced pony soldier, and meant it!

In the Bible (the book you held upside down once, you rascal!), one might propose that the overarching theme could be summed up in two words, “But God…” As hopeful as THOSE two words are, the two words I said were the exact opposite. Powerful in their lack of hope for our relationship turning into a “happily ever after” (like Noah and Allie’s did in The Notebook).

After the infamous, “I do,” the conversation was ending and it was ending fast. Clearly she knew in her heart of hearts that I was a racist, sexist, homophobic pig (I AM a white man, after all) and she didn’t want anything to do with it. The last nail in the coffin came after she asked me to share a few reasons why I support you. I think the third thing I mentioned was about your work preventing government funds from going to entities that perform abortions. By the way, did you know one person cannot have two blood types? I wrote a blog post about how this simple scientific fact supports life, not choice… in regards to abortion.

Anyway, after I brought up your work against abortion, you would’ve thought I just told her Cheez-It’s aren’t made with real cheese. Her patience with me had run out so she wished me well and it was over. I’ll give her credit for not wasting more time with someone that doesn’t believe exactly the same things she does.

I’ve never written to a President before so I’m not sure how to end this. I guess I’ll put it this way, sir… I’m STILL single. Of course, I rather have you in the White House than a mad woman in mine.

I heard President Trump say this a few weeks ago after a reporter asked a question, clearly looking for a “gotcha” moment. I really liked his response. I’m going to try to work this in to every conversation I have for the foreseeable future.

The President of the United States is in Nashville today touring the tornado damage in the area. The upside of living in the flight plan of the nearby airport is usually being able to see lots of different types of aircraft coming and going. And I like watching airplanes.

My first experience with Air Force One was one day when I was home for lunch. I let the dogs into the back yard and looked up to see a gigantic plane flying over. It was none other than President Obama arriving in Nashville. Well, with a little heads up I planned to be ready this morning when President Trump flew by. I wasn’t sure he’d fly over my house because sometimes planes have a different landing path to the airport. But then this happened….

Pardon my excitement in the video. It’s just a surreal and majestic site to see this so close. Let’s put politics aside and just enjoy the moment!

Thanks for stopping by!

I was away from home working but made it back just before President Trump started speaking and in total, he spoke 1 hour, 18 minutes, and 1 second. In this speech, he had a few surprises– giving out the highest civilian medal, the Presidential Medal of Freedom, to Rush Limbaugh. Not long after he was part of a surprise reunion of a military member and his family. As someone who knows how it feels to be reunited with their dad after he was off at war (although it wasn’t a surprise for us when he returned), that moment in the Capitol was a sweet one.

As for the coverage, I was watching on ABC and noticed something a bit peculiar. They had a small box on the left with a live shot of the Capitol building exterior. Is that a thing broadcasts do? I don’t ever remember seeing a locked off shot like that so I wondered if they knew something I didn’t. Like some sort of attack was coming! (Nothing bad happened, so I must just be a conspiracy theorist 🙂 ). 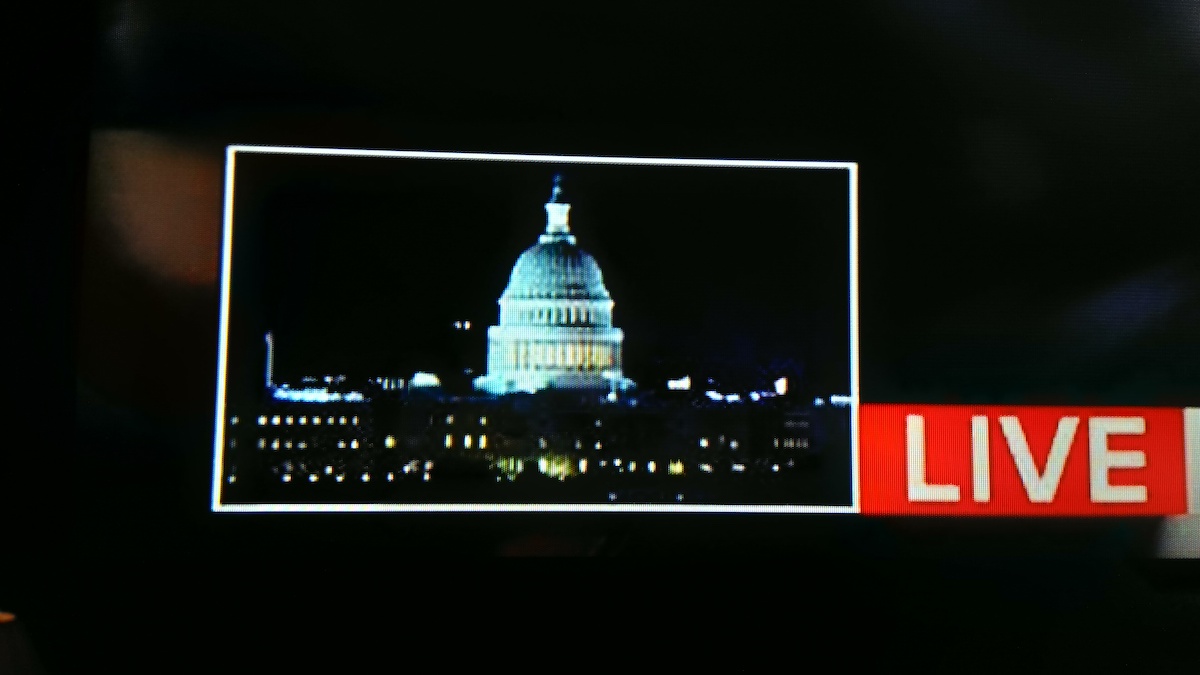 Anyway, the State of the Union routine was somewhat predictable. The President’s party standing in applause very often, and the opposing side sitting with arms folded. I’ll give credit to the Dems though… they did stand up at least once when Trump mentioned the Family Leave Act. Far be it from me to say it seems typical that a Democrat would cheer at the mention of getting money for NOT working, but well, they did. They half-heartedly applauded a few others times, except for that one gentleman who was clearly sleeping. Oopsy!

Whether you’re a Democrat or a Republican, I hope we can all agree on something that needs to change. This whole “I only support ideas in the speech if they come from a President from my party” has got to end. President Trump said some great things and yet half the room stayed seated. I listened intently to hear if the things he was saying leaned right, and there were quite a few thoughts that were simply good, true, humane, thoughtful, and kind towards people. Yet Democrats were determined to show their opposition. I know it would be the same if it was a Democrat President, so Republicans and Democrats alike need to grow up and support America, not just their own party. A good idea is a good idea no matter who says it. I’m sick of “politics” as we know it. It’s time we get back to working together, compromise, and quit with the hatred between parties. OK, I’ll get off this little soap box 🙂

The Democratic response came from Michigan Governor Gretchen Whitmer and was clocked at 10 minutes and 39 seconds. I liked her approach. Instead of battling back against Trump, she spoke positively about what Democrats are doing in our country. Do I agree with her on many things? Probably not. No, no… definitely not. But she kept her hatred for Trump at bay so that was refreshing.

Now all we gotta do is figure out who Nancy Pelosi’s invisible friend was that she talked to throughout the entire speech and we’ll be cookin’ with gas.

Did anything from the SOTU stand out to you? If so, comment below!

New York City, NY — Hosts of an afternoon CNN political program got into a lengthy debate yesterday when the topic of “quid pro quo” came up. Producers of the live show were thrown for a loop when the four experts diverted into a realm of discussion not typically suited for a CNN show.

“Next up for discussion was their thoughts on ‘quid pro quo,’ because that’s something Americans care about,” said associate producer Geoff Garcia. “But then it got a little weird.”

In a surprise move, Anne Moore counted aloud the number of vowels in ‘quid pro quo,’ which she declared to be five. Why she did this is still unclear, but Bill Williamson followed it up with his take on other phrases that contain a lot of vowels. Here’s a partial list they came up with:

Barking up the wrong tree (7)

Neither here nor there (8)

Things got a little tense when Ron Thompson chimed in with “I could eat a horse.” His three colleagues believed this offering from Ron crossed a line, because, as Anne Moore said, “we here in the US don’t eat horses, OK?” Ron was apologetic stating that he was only trying keep up, not that he would ever actually eat a horse.

CNN brass caught wind of the statement and quickly cleared up the matter. An insider who spoke under conditions of anonymity said upper level management asked Ron only one question concerning the horse comment. “We’re not going to beat around the bush. How would you feel if President Trump were to be impeached, and had to leave office?” Ron replied he’d be “over the moon.”

Ron was reinstated, promoted, featured on the cover of People magazine, and is now up for a Nobel Peace Prize.

-Out of the Wilderness News